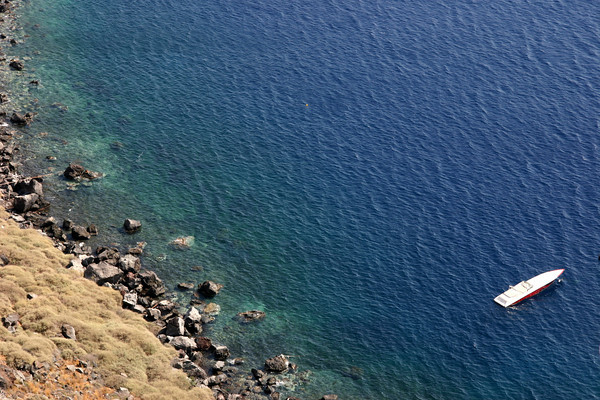 2008 seems to be the Year of Weddings. There was Jonathan and Louise’s in July, Paul and Bonnie’s in August, Claire and Ed’s in October, Chloe and Kieran’s is in November and last month was Mark and Penny’s. That’s five weddings in as many months. Kathryn likes this because it means she has to buy five different wedding outfits. I, on the other hand, must suffer the shame of being photographed in the same suit at different weddings.

So last month we caught Olympic Airlines flight OA270 to Athens to spend the week leading up to Mark and Penny’s wedding in Greece. We had skilfully booked the worst flight times possible so after a brief but refreshing three hours sleep at the Holiday Inn, Athens we boarded another flight at 5:45am to the island of Santorini.

Also known as Thira, Santorini is a circular group of islands, part of the Cyclades in the Aegean sea. It is basically all that remains of one of the most cataclysmic volcanic eruptions in the history of the planet. In about 1650 BC a chain of eruptions shot thirty cubic kilometres of magma into the air causing the whole centre of the island to collapse and the sea to flood in and fill the caldera. It is believed the huge amounts of ash thrown into the air may have brought down the powerful Minoan civilisation in Crete one hundred kilometres away. People eventually moved back to the island but eruptions and earthquakes continued sporadically up until a major earthquake in 1956 destroyed most of the houses in the towns of Fira and Oia. Luckily for us, the locals rebuilt Oia into one of the most unique and beautiful villages on earth. 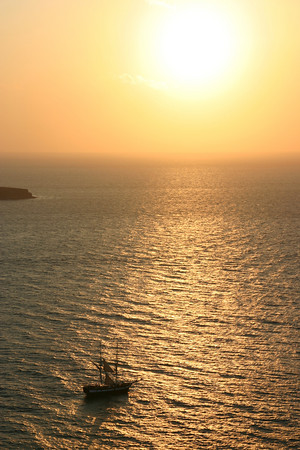 We arrived very early on a Sunday morning and as our room wasn’t ready we wandered into the centre of the village. A feature of Santorini, or at least Oia, is the large number of stray dogs. At first it was cute but by the time we were surrounded by about six barking dogs throwing themselves at the tyres of passing cars the novelty was starting to fade. We managed to lose the dogs and found ourselves at the ruined Kasteli (Castle) of Agios Nikolaos above the town. It was still only about 7am and we had the place to ourselves for a couple of hours as we watched the sun slowly creep up over the cliffs and light up the strange windmills pointing out to sea.

We were in Oia for three nights and it is truly a unique and beautiful place. The bright white houses are perched on the top of red volcanic cliffs and the tiny streets are paved with marble. The distinctive blue domed churches seem to be around every corner and, just like Venice, you find yourself stopping to marvel at the view every few steps.

We stayed in a little studio apartment called Strogili and it was fantastic. The view from our balcony where we had breakfast every morning looked straight out over the caldera. We quickly lost track of time as we drifted between breakfast, the pool, a stroll into town and dinner. Oia supposedly has the best sunset on Earth and every night people from all over the island fill the streets of the town to watch. I don’t know if it is the best but it certainly is beautiful as the sun sinks into the sea and the sky fades to orange. 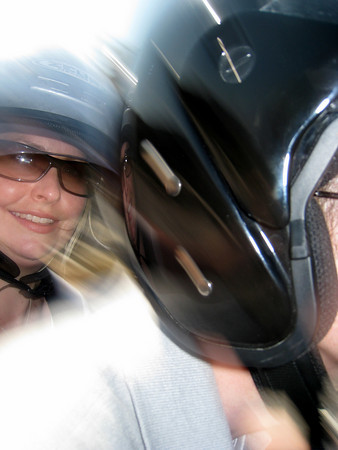 One day we hired a quad bike and rode to the main town of Fira. Fira is still amazing and if we hadn’t come from Oia we would have thought it was spectacular but it’s just not as nice as Oia. It is much busier and generally more touristy as Fira is where all the big cruise ships dock so there is a constant stream of day-tripping tourists. It’s worth a visit but staying in Oia is definitely recommended. We took the long road back via the southern beaches.

Oia also has one of the most perfect bookshops in the world. Atlantis Books was started in the basement of one of Oia’s traditional houses by a couple of friends who found themselves on Santorini with not much to read. The bookshelves are all hand made and the staff rotates throughout the year, living in the bookshop itself. When we visited I had to go through into the kitchen to pay by card where I was offered a sample of the pancakes being cooked for dinner that night. The shelves are stocked with lots of interesting books but I wanted something suitably Hellenic so I bought a copy of Zorba the Greek.

After the serenity of Oia Athens came as a bit of a shock. We were there for two days which I think is about the right amount of time. Of course the Acropolis is the main thing to see there but I found it a bit overrated. Maybe it’s because it was crawling with thousands of tourists, or maybe it’s because we nicked the best bits off the Parthenon. Actually there are a some other really interesting things to see in Athens besides the Acropolis. I thought the Temple of Olympian Zeus was good (and far less crowded) and the National Archaeological Museum of Athens is a very good museum.

From Athens it was finally on to Xylokastro for the wedding. Xylokastro is a lovely little seaside town in the Peloponnesus about 40 km west of Corinth. The beach at Xylokastro is stunning with the most pristine, warm, clear water I have ever seen. Here we spent a fantastic few days with Mark and Penny, Jonathan and Louise and the Monkey. The wedding itself was unlike any wedding I’ve been to before. It started as the sun went down and the celebrations didn’t finish until much much later…

Before this trip Greece had never been very high on our list of places to visit but we had such a great time; relaxing on Santorini, exploring in Athens and spending time with friends and family in Xylocastro and of course eating fantastic Greek food everywhere!

Some holidays are over in a few days but others stay with you for a long time.